The first time I was exposed to the music & story of The Phantom of the Opera was, I believe, senior year of high school when my band director chose the music for us to play.  Immediately I was enraptured by the glorious songs; the fact that they featured multiple flute solos for me helped a little, I suppose.  In any case, one Friday our director decided to let us watch the most recent film version of the story (the 2004 version directed by Joel Schumacher) so that we could become more acquainted with the music.

The movie is almost 2.5 hours in length so naturally we weren’t able to watch it in entirety in class that day.  I distinctly remember leaving class that day, going home, & telling my mother we absolutely had to rent the movie that weekend so I could finish it because I just couldn’t stand to wait till going back to school on Monday to see the ending, not to mention to hear the rest of the music.  Rent the movie we did, & I’ve been absolutely enraptured with it ever since.  From the emotional story to the dazzling scenery to the excellent cast (who knew Gerard Butler, who’s had no formal training, could sing so well?!) & above all the beautiful music, this film is one I’ve watched literally dozens of times in the past eight or nine years, yet it’s never lost its magic.

A few years ago I read the original novel by Gaston Leroux on which Andrew Lloyd Webber’s musical & the subsequent film (which Andrew Lloyd Webber helped to produce) are based.  The basic premise is the same, though the musical & film certainly took some artistic liberties.  For example the film certainly takes a more sympathetic view of the Phantom, but I believe this serves only to enhance the original story by evolving it from a more simplified good vs evil plot to a more complex one in which the viewers are inspired to question the very nature of good & evil as well as society’s responsibility to those who are, for whatever reason, its outcasts.  The film also ups the sexual tension between Christine & the Phantom, but frankly I think that it was only rational to do so.  Indeed it is rare that I find a movie that is better than the book on which it was based, but in this case I think the film truly provides the most compelling version of the story.  (Not to mention that Andrew Lloyd Webber’s music is what truly makes the story come to life.)

Many who think of The Phantom of the Opera story probably think only of an odd love triangle centered on a “haunted” opera theater, but I’ve always seen this story as so much more because of the life lessons it offers to us.  For many years I’ve felt this was a story that just begs to be written about & today I feel compelled to share why I think this story is one with truly everlasting value.  Thus I will attempt to describe what I feel are the greatest themes imparted to us in The Phantom of the Opera & why you too should be as enraptured by this captivating story (& music) as I am.

Say what you will about the Phantom, but the movie makes it obvious that he wasn’t exactly born evil.  It was the rejection & torture he faced from his own mother & clan that serve to mold him into the beast he eventually becomes.  You have a cold heart indeed if you can watch the suffering of the Phantom as a child/teenager & not have sympathy for his sorry state, particularly since the disfiguration of his face was hardly something he chose to have, hardly something over which he had any control whatsoever.  Seeing how the world reacted so negatively & cruelly to him based purely on his physical appearance, it’s really not too surprising that the Phantom turned out to be a rather dark character.  Underneath his tough & rather foreboding exterior, it’s quite apparent that the Phantom is a suffering creature who just longs to be loved & cherished . . . & if that’s not a feeling we can all relate to, I don’t know what is.  In the end, I don’t see how you can watch this film & not become more acutely aware of how important it is that we as a society learn to embrace those who are different & not treat them rashly or cruelly . . . for if we do not embrace them, we may well come to regret it later.  For example, in this story not only does the world miss out on the Phantom’s musical genius because they have rejected him due to his disfigured appearance, but eventually they suffer a great deal of misery at his hands. 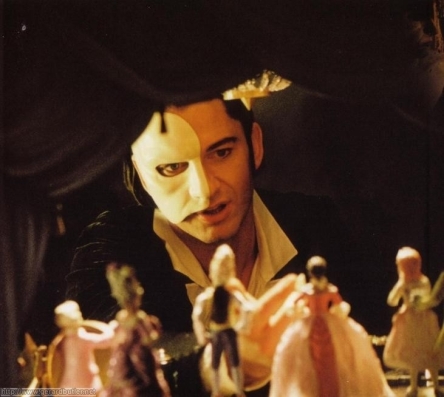 Perhaps I will sound like I’m contradicting myself here because of all that I’ve said above “in favor” of the Phantom, but I do believe this film eventually sends us the message that regardless of our outside circumstances, we are each in the end responsible for how we choose to deal with the cruelty, frustrations, & injustices that we face in this world.  As Christine tells the Phantom at the climax of the film “This haunted face holds no horror for me now.  It’s in your soul that the true distortion lies . . . The tears that I might have shed for your dark fate grow cold & turn to tears of hate!”  In the end, it isn’t the Phantom’s disfigured face that drives away the girl he’s come to love; it is the evil he’s allowed to grow in his soul.  What perhaps is most touching is that Christine’s sympathy towards the Phantom eventually encourages him to show sympathy to her & let her go so that she can live her life with Raoul.

As some of you may know, I hate all that sappy Nicholas Sparks romance bullshit, but I’ve yet to watch The Phantom of the Opera without feeling my heartstrings tugged from all angles, & I can’t help but believe that is largely because of the music.  From the dark power of the title song to the sweet beauty of All I Ask of You to the seductive enchantment of The Music of the Night & The Point of No Return, I don’t think there’s one human emotion that isn’t touched on in these songs.  I truly don’t see how anyone with a sense of hearing could watch this movie or listen to the songs & not feel stirred in some deep & primal way. 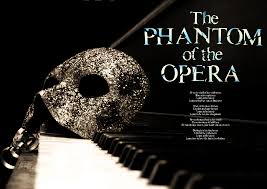 If you’ve not yet seen The Phantom of the Opera, either as the musical or as the film I’ve described here, I hope you’ll take the time to check it out soon.  Hopefully I’ve not given away too much of the plot but have tempted you with enough enchanting glimpses that you’ll be compelled to experience the story & its captivating music in all its great splendor.  Trust me, you will not regret it.