As some of you may know from reading earlier posts on here or from knowing me in real life, I grew up in a very conservative Baptist church in a small town in Virginia.  Naturally as part of that, I grew up thinking that being gay, bisexual, transgender, or anything at all outside of “normal” straight-forward heterosexuality was not only “weird” but entirely wrong, indeed sinful.

Props to the brilliant person who made this

Once I was a teenager & started to question a lot of the things I was taught growing up, one of the greatest issues I faced was the issue of homosexuality.  I just couldn’t find it within myself to label something that seems such a fundamental part of a person’s identity as wrong.  It just didn’t make sense to me, even then, that this supposedly loving omniscient god would create someone a certain way & then say “Nope, that’s wrong, & you’re going to Hell if you don’t ask for forgiveness & change it.”  That just made absolutely zero sense to me, & I for one have always struggled to believe anything that seems completely contradictory to basic logic & reason.  I just can’t do it, even if part of me wishes I could just so life could be “easier.” 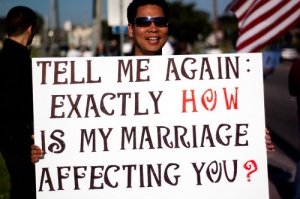 Once I got to college & started meeting people who actually were gay & bisexual, I knew I could no longer believe that such things were wrong.  I could not look in the eyes of a friend, someone I knew to be a decent, loving human being, & say to them “Your whole identity is wrong.”  Furthermore, the more I studied gender identity issues, the more I knew I could never again stand against anyone who questioned their own identity or sexuality because the more I tried to understand these people, the more I realized they were just like me.  I don’t mean that I am bisexual, lesbian, or transgender at all.  I just mean that at heart we are all the same: we’re all human beings who just want to love & to be loved & to understand ourselves & be able to express ourselves as best we can.  And what could possibly be wrong with that?  As long as no one is getting hurt, why should any of us care who anyone else wants to sleep with?  In the grand scheme of things, it’s really quite petty to obsess over such things.

Sometime in 2013 I discovered the metal band In This Moment whose lead singer is Maria Brink.  Immediately I was intrigued by the dark yet inspiring music created by this incredibly talented woman & her band.  After thoroughly enjoying Blood, I was quick to purchase their 2014 album Black Widow last year.  Very soon I realized this was without a doubt one of the best albums of the year & by far the best album ITM has created to date.  The whole thing is just musically & lyrically brilliant.  Perhaps because of how much material there is to digest on this disc, it was just yesterday that I realized how incredibly powerful is the eleventh song “Natural Born Sinner.”  I’ve enjoyed the song ever since I bought the album a few months ago & yet I was more focused on some of the other pieces so that I never realized exactly what the theme of this song is.  While at the gym yesterday, the song came on my iPod & for some reason I really listened to the lyrics more than I ever had before.  I quickly understood that this song is the perfect anthem for LGBTQ rights.  I can’t say it better than Maria Brink herself, so I’m just going to share the lyrics for you to read below.  Notice the opening segment is a direct quote from John 8:7, the King James Version no less. 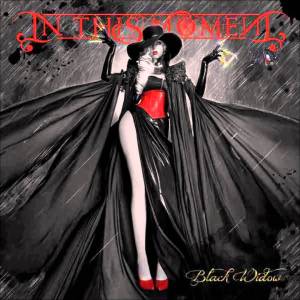 “So when they continued asking him
He lifted up himself, and said unto them,
‘He that is without sin among you, let him first cast a stone at her.'”

Listen closely, to what I’m about to say
I think I’ve heard just about enough of your hypocritical ways
Don’t try and stop me now
Don’t you make a sound
You’ve built yourself up oh so high just to tear me down

This is my song
My red crusade
What will I say?
What will I do?
Maybe it’s fear that leads your rage
Maybe you’re me and I am you

So go ahead and point your finger
Tell me who to love, is it him or her?
When will you see this is who I am?
S-I-N-N-E-R
Natural Born Sinner

I’m not gonna change
So stay out of my way
I don’t need you to understand
That I’m already saved
Maybe you should stop, question all your pain
Can you look me in my eyes and say we’re not the same?

Did you really think by pushing me
I would become what you want me to be?
And did you really think by hating me
I’d open up, I’d just hand you the key?
I know you’re scared and don’t understand
This is my life, this is who I am
What I do know is come Judgement Day
Before the Lord can you say the same?

This is my song
My red crusade
What will I say?
What will I do?
Maybe it’s fear that leads your rage
Maybe you’re me and I am you

I have no idea if Maria Brink is lesbian or bisexual herself, but I do know she has a son so I’m inclined to say possibly bisexual, but I really don’t know.  And the fact of the matter is, it doesn’t matter.  I’m just so grateful to her for writing such a powerful song that embraces exactly how I & so many others feel about this issue.  The fact is none of us is perfect.  We are all flawed in numerous ways.  But far be it from me to judge anyone for something so fundamental as their sexuality. 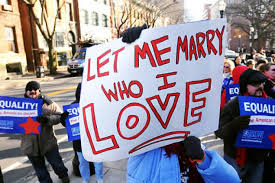 Indeed, in a world full of poverty, orphans, violence, & environmental destruction, I find it really quite incredible that so many people are still bothered by homosexuality & other “less than straight” forms of sexuality.  I know I may catch some flack from some of my own family for so openly championing gay rights, but I’ve reached the point in my life where I realize that I’ll never please everyone anyway & life is far too short to remain silent about things that matter in an effort to fit in or be accepted by anyone, even those you love.  So this is me, a strictly heterosexual female, unapologetically telling the world that I support homosexuality, bisexuality, & transgenderism.  You can like it or lump it as far as I’m concerned.