As I write this today I am barely holding back the tears.  In reality, the only reason the tears aren’t falling now is because I have already shed so many today that my eyes are now quite dried up.  I rarely share about my personal life on this blog because I’m not egotistical enough to think that many people would want to read about my personal life, & being a bit of an introvert (I scored 50 out of 83 on this test today:  http://www.buzzfeed.com/mackenziekruvant/are-you-actually-an-introvert) I don’t care to go into much detail about my personal life in this space where anyone & everyone can see it anyway.  Today, however, I am breaking my own rules to share the incredible sadness that I am currently experiencing. 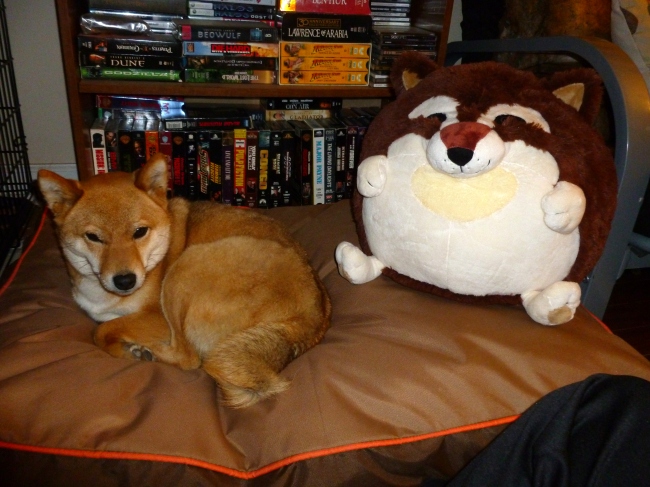 About two weeks ago I went to the pound with a friend for her to adopt a dog.  I had no intention or expectation of adopting my own dog, but it just so happened there was an adorable two year-old female shiba inu there & I fell in love at first sight.  Instantly I knew I had to take her home with me.  The people at the pound told me she had a bad history with other dogs, but they said she’d never actually hurt another dog, just didn’t get along with them very well.  Being overwhelmed with how adorable she was, I easily overlooked the obvious fact that something was probably seriously “off” about her for such a rare & expensive breed to be at the pound.  When they implied she’d been brought to the pound more than once, I should have taken that as a major red flag, but I was drowning in a sea of oxytocin or some such hormone/neurotransmitter . . . and all I could think about was how much I already loved this dog & how I was so sure my love for her would “cure” her.

Fast-forward a few hours & my husband meets me at the pound, instantly loves her as much as I do, so we pay the $45 fee & take her home.  Over the next few weeks she & Chaucer (the one-year old welsh corgi we bought as a puppy last April) get into a few spats but nothing too serious.  I take Sheba to the vet & inquire about ways to help her better integrate into her new environment.  The vet says she seems perfectly healthy & that in time she & Chaucer should do just fine, though she warns me that shibas do have a tendency to not like other dogs.  Sheba & Chaucer continue to have a few “fights” but overall seem to be learning to get along better.

Then this morning out of nowhere Sheba bites Chaucer on the face.  After much discussion & a great deal of tears we decide that Sheba has to return to the pound. She is a gorgeous dog who is sweet with humans, & in a pound full of pitbulls (no offense to them; it’s people who have made SOME of them dangerous & caused a horrible breed stereotype) we are sure she will be adopted quickly, hopefully by someone with no other pets.

But still my heart is breaking.  I couldn’t even watch my husband take her away because I knew I couldn’t say good-bye to her because I wouldn’t be able to let her go.  But I also can’t stand to see Chaucer get hurt.  With her history of aggression toward other dogs, we know this isn’t a first for her (maybe the first bite but not the first time she’s been aggressive) so we don’t feel like we can just train it out of her like we could with a puppy.  We also didn’t do adequate research to find out that shibas as an entire breed do not do well with other dogs.  So now we’re left with the realization that her entire BREED is not too keen on other dogs . . . hard to change something that is more or less in her DNA.

I feel like such a horrible person for taking Sheba back to the pound.  But with our work schedules we have to be able to leave our dogs alone together & know they won’t hurt each other.  Chaucer has no idea how to fight back & I shudder to think how much more she might have hurt him if we hadn’t been there to break up the fight today.  The strange thing with her was she never showed much in the way of threats.  It was obvious she wanted to be left alone most of the time (from Chaucer, not us, that is) but she never really gave him obvious signs that she would actually hurt him.  Which makes it all the scarier because it’s hard to predict.  She also started fights with him (granted he provoked her by not leaving her alone) right in front of us.  So it’s not like watching them was enough to ensure it didn’t happen.  I really don’t know why I’m writing all this.  I know in my heart we probably did the right thing.  But I just feel so awful about it & I hate myself for being stupid enough to think that I could magically change things just by loving her.  And part of me thinks we gave up too soon, yet part of me also thinks risking Chaucer getting hurt again was too much of a risk to take.  All I know is if these were children & they fought we couldn’t & wouldn’t get rid of one of them . . .

I guess the lesson here is I shouldn’t have made a decision based purely on emotions, a decision that disregarded logic.  And yet I also know I couldn’t have lived with myself if I’d left her at the pound the first time.  I had to at least TRY to save her.  Maybe I just wasn’t the one.  But that breaks my heart in so many ways.  I wanted to be the one to save her.  But I also couldn’t live with myself if she ever hurt Chaucer really badly.  I guess this is just one of many life situations that has no good answer . . . I’ve always said I don’t believe in love at first sight.  But Chaucer changed that.  And then Sheba did too.  I guess another thing I learned here is that I do have a great capacity to love, so maybe one day that will translate into motherhood.  I’ve always had this insane fear that if/when I have kids someday, I won’t experience that immediate natural love & connection that moms always talk about & are supposed to feel.  Maybe knowing I could feel something like that with dogs is good foreshadowing for the future . . . In any case this post is in tribute to Sheba, a dog whom I firmly believe has a good heart.  She’s just got a wild streak when it comes to other dogs.  Sheba, I still love you & I’m so sorry I wasn’t the one to save you.  I might have only known you for a few weeks but I’ll never forget you & I’ll always wish my love had been enough.

Ok, the tears are here again . . . I apologize for the depressing post.  I try to avoid these but this one was written mostly for my own benefit, as a way to assuage my horribly stricken conscience & maintain some shred of sanity in the face of this heartbreak.

If anyone in the Raleigh-Durham area who would like a dog but doesn’t currently have pets is reading this, please go to Wake County Animal Shelter & adopt her today.  I promise she is perfect with people.