This post is written to myself above anyone else.  If anyone needs a lesson on being less self-conscious, trust me, it’s me.  I was talking to a friend last night about how I’m afraid to do squats & deadlifts at the gym because I feel like doing them, God forbid, draws attention to myself.  I used to deadlift pretty regularly, but then one fateful day some random guy (who seemed nice enough) walked up behind me while I was deadlifting & asked me to go out with him.  I was shocked, embarrassed, & flattered all at the same time.  But I managed to stammer “Um, I’m married” (which was true) & he walked away looking like he was as embarrassed as I was.  And ever since that day I have been scared to deadlift or do anything super “masculine” at the gym for fear of drawing attention to myself.  (As further proof that I’m self-conscious, when I saw the guy walking up behind me I thought for sure he was going to tell me I was doing my deadlifts wrong).  I know some girls like being the center of attention but I hate it.  As ridiculous as I know it sounds, I’ve always felt like if anyone looks at me long enough, they’ll be certain to find something they don’t like.  Therefore, more often than not, I’d rather people just not look at me at all, especially at the gym because it’s a place where I’ve never quite felt “at home” anyway, probably because I’m far from athletic or coordinated.  I know I am also far from “perfect,” but I do have enough common sense to realize that I’m not exactly unattractive either.  And yet I am too self-conscious to perform certain exercises at the gym?  Ridiculous.  Absurd.  I have to get over this. 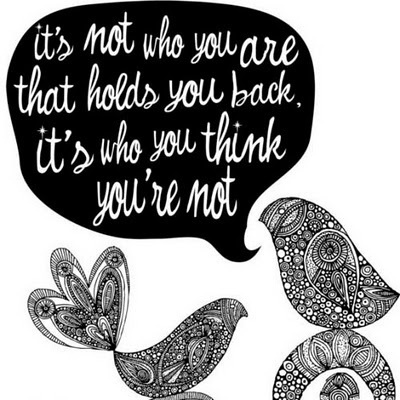 This whole scenario has gotten me to thinking once again about how ridiculous it is that we as women so often grow up with the idea that we should be ashamed of our bodies or at the very least that they are something to be hidden.  Now, I’m by no means suggesting that we should all parade down the street nude or show up to class or work in a bikini.  It’s all about context.  But the point is that the average man (to my knowledge) isn’t ashamed of his body even if he doesn’t look exactly the way he might wish.  But the average woman, no matter how beautiful everyone else might think she is, is ashamed of her body or at least isn’t very confident about it.  For a variety of reasons, society has taught us from a very young age that our bodies are shameful or dangerous (as in too strong of a temptation for men to resist, “so you better cover up, young lady”) or a combination thereof.  What our society fails to realize in indoctrinating girls thusly is that we are also sending the message that girls THEMSELVES are shameful.  After all whether we like it or not, the way we view our bodies is highly connected to the way we view ourselves as people.  I could expound on this further but that’s another post for another day.

On a similar token we constantly read articles & hear people talk about how harmful it is to young people, especially girls, to see all of the highly edited images of “perfect” models & celebrities in magazines & online.  I for one grew up viewing a lot of these same types of images but even as a teenager I never expected myself to look like those images.  I guess I was just insightful enough to realize that those people aren’t “real” & that the average guy isn’t going to expect real girls to look like that anyway.  I’m thankful that I was able to understand this, but nonetheless even as an adult I realize I often hold myself to somewhat unrealistic expectations because even if I know men don’t really expect me to look that “perfect,” part of ME still expects that of myself.

Here’s the real truth, ladies, as best I can figure it anyway.  How we dress does send a message about us & we would all do well to consider that, but at the end of the day, no matter what we wear men will look at us anyway.  We could all wear burkas and men would still look at us.  To the idiots who say women are asking to be raped or assaulted by wearing overtly sexy clothes, please explain to me why sexual assault & rape are rampant in many Middle Eastern countries where women wear nothing but burkas or other extremely conservative clothing.  The answer is that rape & assault are crimes perpetrated by men with serious power & control issues & are absolutely unrelated to any woman’s choice of attire.  But again that is a whole other blog post right there.  What I’m trying to get at is that we women have no reason to be ashamed of our bodies just for being female.  If you don’t like your body because you legitimately need to lose weight, then make positive healthy changes so you can do so.  About a year and half ago I was stunned to realize I had slowly gained about 10 pounds over the preceding few years.  I knew I was entering what was truly an unhealthy weight so I made small changes to my diet & exercise routine & within 6 months I had lost all the weight & a little more too.  Also remember that regardless of your weight, there are men who will find you attractive because, thankfully, everyone’s idea of beauty is quite different.

To dumb the issue down even a little further, consider this: If men really expected us all to look like Victoria’s Secret models & wouldn’t tolerate anything else, then explain how almost all “normal” women do in fact have boyfriends/husbands & often multiple ones throughout their lives.  Obviously men aren’t holding us to nearly as high of a standard as we are.  So with that in mind, ladies, let’s get our act together & stop being so ridiculously self-conscious.  Let’s do our squats & our deadlifts & if somebody asks us out while doing them, so what?  And if no one asks us out while doing them, so what?  The sexiest thing in the world, for both men & women, is self-confidence.  It may sound silly but if you aren’t confident about your body, it’s hard to be confident about everything else.  As I said before, everything is interconnected whether we like it or not.  So today I challenge you to be confident in yourself, not because it’s sexy, but because people who are confident can change the world.