As some of you know, my husband & I went to college in the mountains of southwest Virginia & lived there for another year after I graduated & while he finished up his master’s degree.  We then moved to Raleigh so that he could get a job in his field (genetics).  At first I felt a little overwhelmed living in such a “big” city, but I quickly adapted, & it didn’t take long for me to realize that moving here was definitely a great decision for us.

However, there are still times when I really miss the mountains.  Today is one of those times.  I’ve often said if I could just take everything about Raleigh & transplant it about two hours west (roughly where Winston-Salem is), it would truly be the ideal place to live.

Quite possibly my favorite place in the whole world: Grayson Highlands State Park in SW VA

To be clear, there are so many things I really love about Raleigh, especially as a place to raise our future children.  I love that this is such a multi-cultural area where both my husband & I work with people from literally all over the world.  I love that because of the multiculturalism around here we have so many different options for types of ethnic restaurants, everything from Mexican, Chinese, & Italian to more exotic choices like Indian, Lebanese, Caribbean, Thai, Vietnamese, & Ethiopian.  I love that despite being home to half a million people (plus another half million in the surrounding county, not to mention Durham & Chapel Hill), the traffic around here is really quite manageable, especially if your job, like mine, permits you to miss most of rush hour.  Though housing is certainly more expensive than where we grew up, I’ve been pleased to find that this is still a very reasonable place to live as far as cost of living goes.  It’s not like groceries & gas cost more here than they do in the rural areas of NC.  I also love that there are so many colleges around here, two of which have great associated hospitals & medical/nursing programs (Duke & UNC). 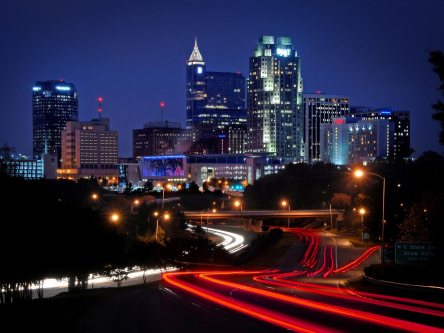 Furthermore, I am grateful that there are so many different educational opportunities for children in this area.  There are over a dozen high schools in Wake County, & that doesn’t even include the private ones!  I couldn’t begin to tell you how many elementary schools there must be.  There are two on the main road off of which we live, & a third one is being built as I write this!  As someone who grew up in a county with one primary, one elementary, one middle, & one high school, at the risk of sounding like a country bumpkin, I have to admit this profusion of schools still blows my mind a bit!  But the point of all this is that if we have kids here they will have the opportunity to attend year-round schools (which I actually think is a terrific idea) & to participate in orchestra & all kinds of extracurricular activities that simply did not exist where my husband & I grew up.  Additionally, upon purchasing our house, I was thrilled to discover that lots of children in this area still play outside, even in the streets.  There are even kids & teens who walk to school here!  And it isn’t just because they’re poor & their families don’t own cars. Amazing!

It’s normal to see groups of kids of different races playing together here.  I love it.

I could go on & on, but for the sake of time I’ll wrap up my treatise on Raleigh by saying that another reason I love this city so much is the sense of anonymity it gives me.  Perhaps it’s because I’m a solid introvert but I love being able to go the grocery store or Wal-Mart or the mall (actually there are half a dozen malls I can go to in this area so I really shouldn’t say THE mall) & almost never run into a soul I know.  Perhaps this sounds awful, but the idea of having to talk to half the people I run into in the store because I “know” them just sounds miserable, & I can tell you for a fact that would be the case if I lived in my hometown or a similar place.  (If you don’t believe that small towns can be suffocating, allow me to share a story one of my cousins told me about shopping in our hometown Kroger.  She was there purchasing a rather large quantity of potatoes & ran into a distant cousin.  Within an hour or two her mother was calling her to ask why she was buying so many potatoes!  Yes, word gets around that fast, even about something as mundane as potatoes!)  On the other hand, Raleigh is a small enough city that I can & do recognize many of the employees at my preferred grocery store & the handful of local restaurants that I frequent. But it’s not like these people actually know me & feel the need to inquire about the details of my life every time they see me; nor do I feel beholden to actually tell them anything significant about my life.

Despite all of these benefits, there are days when I really do miss the mountains.  It’s the landscape itself that I miss more than anything. There is just something about the Appalachians that is unspeakably beautiful & that never grows old.  I miss living where I could go on a dozen beautiful hikes within an easy hour or less drive.  And I miss knowing that everywhere I go, even some place as mundane as the grocery store, would have a beautiful backdrop of mountains in the background.

I’m not saying I want to move; I definitely don’t.  I just wish the mountains were a wee bit closer.  I think what it comes down to is I’m just an odd person because I love the multiculturalism & the educational opportunities of more urban areas, yet to a certain extent I think I will always feel that “real life” is happening in the rural areas & those of us who “escaped” those areas are just enjoying some added benefits.  Maybe there is a part of me that just doesn’t want to admit that the way I grew up was actually NOT the norm.  Anyway, what it comes down to is I am a well-educated young woman with a bit of a Southern accent that I can’t totally kick on some words (& don’t really want to) who really enjoys music as diverse as Beethoven to Eric Church to Marilyn Manson & food as diverse as pinto beans with cornbread to chicken korma & other Indian delights & who will always think the most fetching thing a man can wear is jeans with a plain white T-shirt or a plaid flannel shirt.  I love trying all different kinds of restaurants, but I’ll always prefer anywhere I can go in jeans & a decent shirt & not be under-dressed.  If I have to truly dress up just to get in the door, forget about it.  Perhaps it’s because of all of these “contradictions” that there is a part of me that always feels a bit like an outsider, no matter where I am.  When I’m visiting my hometown, I know I don’t belong there anymore, but as much as I love living in Raleigh, there is a part of me that still feels like I’m a bit of an outsider here too . . .  The other possibility is of course that I just analyze things far too much.  That is always an option on the table with me, ha!

Ok, this is just funny.

I suppose there isn’t much of a point to this post other than to say I do love Raleigh but there is a part of my heart that is still in the mountains, & I think it will always be there no matter how long I live here.

To the Appalachians, you are where I came into my own, so to speak.  You are where I truly grew up & took that final leap into that scary but wonderful place called adulthood.  You are where I fell in love with hiking & all the glories of exploring nature year round.  There is a possibility I may never live in you again, but you will always, always have a big piece of my heart.

Sunrise off the Blue Ridge Parkway near Asheville, NC (taken on our vacation last year)