I must preface this post by saying I am writing this as much for myself as for anyone else.  I’ll explain why later.

These articles are both a bit superficial to be sure, but they are excellent examples of the genre so to speak.  If you don’t feel inclined to read the articles, what the whole idea boils down to is this: grown adults are arguing over whether being male or female is harder.

The reason I started this post by saying I’m writing this to myself as much as anyone is because this past weekend I was quite literally in tears telling my husband that I wish I were male so I wouldn’t feel the insane pressure to choose between family & career when thinking ahead to having children in the next few years.  And the sad truth is in those moments I truly meant it.  My generation of women was sold a great lie when we were told we could “have it all.”  No, I’m sorry, we really can’t.  Yes, we can have great careers & also be great moms, but do not think for even a minute that no matter which option(s) you choose you won’t have to make tremendous sacrifices that your male counterparts more than likely will not have to make as parents.  For example, if a man has a high-powered career & decides to have kids, it is unlikely to have a huge effect on his job.  Yes, he may feel greater pressure to come home earlier to be with his children or to stay in one city rather than move around from place to place in search of promotions.  But overall I think it’s safe to argue that having children is less likely to have a net negative effect on a man’s career.  (I know some women who are reading this are probably thinking “But aren’t you happy that you’re the one who gets to create life, nourish it in your womb, & quite literally feed it?”  Umm, on some level I guess I am, but mostly I just think about how painful & distressing that sounds!  I guess I am too practical for my own good.  I know in time my motherly instinct will kick in & I’ll probably laugh at myself for ever wishing I were male.  But I’m not quite there yet.  Be patient with me.) 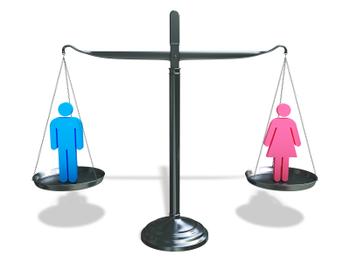 Aside from raising children, there are other situations in life in which I think quite seriously about how I wish I were male.  The times when I’m standing in line at a restaurant & some creepy man behind me is checking me out & making me wish I were not only male but invisible.  (It doesn’t really matter what I’m wearing, by the way.  Certain men look at all women like meat regardless of their chosen attire.)  Or when I can’t open a jar & my husband isn’t home to do it for me & I feel so incredibly weak & ridiculous.  Times like that.

However, I’ve said all that to say this: Can we stop fighting over who has it harder in life?  The reality is that life isn’t fair.  But it’s also not a competition.  Life is hard for all of us, regardless of our gender, race, or anything else.  As one of my favorite high school teachers used to say, “Life’s not fair, I’m not nice, get used to it.”  (Or maybe that last part was “get over it.”  But the point is the same regardless.)  I am wary of writing this because I don’t want to sound like I’m saying we shouldn’t discuss the issues brought up in the kinds of articles I referenced at the beginning.  Reproductive rights, divorce, victim-shaming/blaming in relation to rape or sexual abuse, & other such issues are extremely important & should not be tossed aside just because life isn’t fair.  I don’t think there’s anything wrong with trying to rectify some of the inherent unfairness of life.  Indeed I think it is the ethical thing to do as truly alive, enlightened human beings.

However, in the end there are some things men & women will always be inherently better at or more capable of doing than the other gender.  For example as much as it grinds my gears that teenage boys half my age are stronger than me even though I might work out just as long/hard as they do, it’s just biology.  There’s nothing I can do about it.  I’m sure very few men would admit it, but to a certain extent some fathers must be jealous of the fact that women share a certain closeness with their children that men never really can simply because we’re the ones who give birth to them.  Furthermore even good men have to deal with the fact that women often see them as inherently dangerous.  A friend of mine told me a few months ago that it really bothers him that when he is jogging he’ll often cross paths with women who give him this desperate “please don’t rape me” look.  On the other hand I’ve been one of those women (in similar scenarios), & it sucks to know that there are plenty of situations in life in which you’re dependent on the man or men you’re with being decent individuals in order for you to not get hurt.  I know that must sound melodramatic but it’s true.

Basically what it comes down to is exactly what I said before.  Life is hard.  It doesn’t matter whether you’re male or female.  There are certain inherent advantages & disadvantages to both genders.  Actually I would argue there are probably very few that are truly biologically inherent.  Most of the privileges & disadvantages both genders experience are things society has constructed & therefore can theoretically be changed over time.  This is why I remain hopeful that the world can become a better place for all of us, even in the face of the horrible situations that women (& to a certain extent men) face in certain parts of the world in which equal rights for all is far, far from the reality.

So my plea today is simply this: can we please stop the battle over who, men or women, has it the hardest in life?  (At least in the Western world.)  Life isn’t a competition, belive it or not.  Instead of whining, can we focus on the real issues at hand like poverty, raising children, & reducing sexual violence?  Like I said, this post is as much for me as for anyone because I know I am quite guilty of whining about my gender from time to time.  After all I spent half this post explaining why I sometimes wish I were a man.

However, in the end, life is hard for all of us.

But it’s also beautiful, thrilling, & way too amazing to spend whining about something so completely beyond our control as our chromosomes.

(As an addendum, this post is in no way meant to be insensitive to those who are born feeling they are the “wrong gender” &/or are transgender.  That is an entirely different scenario which is not at all pertinent to what I’m discussing here.)