Last night I began thinking that it would be fun to start a blog series about my favorite rock stars.  I’ve been working on a post on this topic for ages now, but I’ve realized that such a post would be more like a novel.  So what better way to break it up a bit than creating a series of posts about all my favorites?  These will be appearing in no particular order.

*Warning: I do not censor my favorite rock stars, so yes, there will be swearing (duh).

This week I’m going to initiate the series with Chris Cerulli, otherwise known by his stage name Chris Motionless, the lead singer of Motionless in White (MIW) out of Scranton, Pennsylvania.  If you’re not familiar with MIW, their music could be described in various ways from heavy to gothic to horror metal & probably a lot more.  They’re exactly the kind of band that ten years ago I could never have imagined myself enjoying.  But they’re also a band whose music I fell in love with immediately upon discovering it.  You can read all about that here. 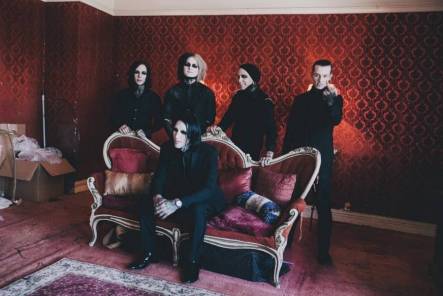 Chris (seated) with his bandmates from Motionless in White

I’ve actually written a bit about Chris on this blog before because he is just such a unique individual in so many ways.  When I first discovered him & his band, I immediately felt a powerful connection because of my love for people who break stereotypes.  Chris is a man who is covered in tattoos & piercings & is never seen wearing anything other than black.  (There might be other colors involved, but the greater part of any outfit of his will always be black.)  He is also famous for his extreme use of makeup including his lust-worthy eyebrows.  Not going to lie, I never thought I’d say a man looked good in makeup, but Chris Motionless taught me otherwise.  See the picture below if you don’t believe me.

Basically, in appearance Chris is much like a younger, more modern version of Marilyn Manson.  And just like Manson, there is so much more to Chris than what many would initially assume based on appearance alone.  A lot of folks would assume someone who looks like Chris would be a devil-worshipper or at least a drug user or alcoholic.  As it turns out, Chris is none of those things.  In fact he’s very well known in the rock/metal community for his “straight edge” ways.  In other words, he does not drink, smoke, or participate in promiscuous sex.  If you find any of that hard to believe check out this interview.

Is this jacket epic or what?!

What I love best about Chris’s choice to live this way is that he doesn’t push it on other people (some of his own bandmates do smoke & drink), & he hasn’t chosen this lifestyle because of any religious affiliation.  He has chosen it simply because he thinks it’s the best way for him to live: “I think alcohol, and getting high, and all that shit, is retarded . . . I’ve never really had any interest. Like… You know how some people are even curious to see? You know – “I don’t drink, but I wanna know what it’s like to be drunk” or “I wanna see what it’s like to be high even once.” It just doesn’t have any interest to me at all. It just doesn’t make me feel like I wanna know. I think that shit’s disgusting . . .  if I’m with somebody, then it’s a monogamous relationship . . . I’m not a playboy, for lack of a better word. I have a little self-respect.”  See the link in the previous paragraph for the full interview from which these quotes are taken.

Despite writing & performing what many would describe as very dark music, Chris is also well known as an extremely polite individual with a propensity for kindness & having a great smile.  “. . . the MIW frontman has a fearsome onstage persona that’s somewhat at odds with his friendly and well-spoken offstage self. “I don’t want to be an aggressive and intimidating person to people in real life,” he explains. “That’s why my stage character has a different name than me [Chris Cerulli]—it’s a good way to let that part of my personality shine. It’s a big reason why I love to play live, having that outlet . . . There’s a lot of anger inside of me, and I certainly don’t have to convince myself to be pissed off.”  (See this interview for more, which includes Chris talking about how his parents have always supported him despite not being too fond of his general appearance.)  Despite the fact that I don’t have any tattoos or piercings (outside of earrings), nor do I dress in all black or wear heavy makeup, I can strongly relate to Chris on this subject because while I am known as a very kind, polite person, there is a lot more to me than might initially meet the eye.  Which is probably why people are often so shocked to discover that I like such “hard, dark” music.  I’m not saying I’m a deeply angry or bitter person on the inside.  Not at all.  But I’m not some “happy-go-lucky I love everyone all the time” angel either.

Chris is also a big promoter of self-respect & personal responsibility & has openly decried fans who try to credit him with saving their lives: “NO. I did not save your life. NO.. band X, Y or Z did not save your life. IF in fact you were on the brink of any self harming action… it was YOU who pulled yourself from the ledge. You saved your life, You are the hero. Why are people not willing to take credit for their own actions? . . . MIW’s main message has always been about not giving a fuck what people thought and encouraging you to do the same.”  (You can read Chris’s full blog post on that matter here.) 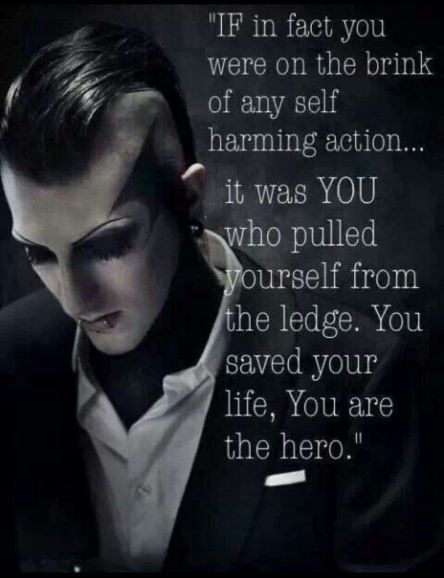 Furthermore, MIW’s latest song from their forthcoming fourth album is all about how the band has achieved the success they have today through sheer hard work & determination.  Check out the music video here.  With lyrics like these, you’d be hard-pressed not to find this song inspirational:  “I’ve been to hell & back, with no promise of return/So I made friends with fire to keep from getting burned/No money, no sleep, dedication/10 years on the road, this is sacred/And when I’m facing a wall, I do not quit/Cause if you mean it, you will make it/Pulled apart in a world so demanding/I’m still here, still standing/I’ve sweat blood from Stockholm to Scranton/Still here, still standing . . . If you mean it, you will make it!”  (If you’re curious about the song’s title 570, it’s the area code of the band’s hometown Scranton, PA; hence the lyric about Scranton in the song.)

I hope that reading all of this will inspire you to check out Chris’s band if you aren’t already familiar with them.  To start you off, here are some links to a few of my favorite MIW songs: