In any case, this week I’ve decided to honor rhythm guitarist & founding member of Five Finger Death Punch (FFDP) Zoltan Bathory.  In light of all the turmoil after the election, it seems appropriate to feature a man who so perfectly embodies the American dream.  Here is a man who grew up in Communist Hungary, built his first guitar partly out of a coffee table, moved to the US when he was 20 (not speaking more than a few words of English at the time), & eventually founded what has become arguably the most successful modern rock/metal band in the world today.  If anyone knows what it’s like to chase a seemingly impossible dream & to overcome what appear to be insurmountable obstacles, it’s this guy.  If his life isn’t the embodiment of the American dream, whose is?

It’s not too uncommon for the lead guitarist to be one of the designated leaders or spokespersons for a band (think Ben Bruce from Asking Alexandria), but it’s less common to see the rhythm guitarist take that role. However, it has been obvious since the band’s breakthrough in 2007 that Zoltan has always been the biggest driving force behind FFDP, the man who holds it all together so to speak.  This is probably largely due to the alcoholism that frontman Ivan Moody has struggled with over the years as well as the past drug use & alcoholism of drummer Jeremy Spencer.  Now that Jeremy has been sober for several years & Ivan has started to recover as well, this is probably a bit less of an issue, but if you read Spencer’s autobiography he acknowledges more than once that Zoltan has often played the role of “dad” to the other band members when they allowed drinking, drugs, women, or other such temptations to distract them from the greater goal of the band.

On a more superficial note, how can you not love a guy with amazing dreadlocks like Zoltan’s?  I’ll be the first to admit that white people can rarely pull off great dreads, but Zoltan is definitely the exception to that rule.

Outside of music Zoltan has many hobbies including martial arts, Monster trucks, cars, & yes, guns.  In fact he is one of the only civilians who is a trained weapons instructor with the US military.  In light of that, it’s probably not surprising to find that he is also an NRA member.  Regarding gun rights, Zoltan has stated: “The second amendment makes all the other ones possible. But let’s extend this; it’s not just about the rights that are given to you by a piece of paper.  When your life is in actual danger, you don’t care about any paper; you will just defend your life no matter what it takes.  It’s about defending yourself & your family. You should be able to do that.  Some people say that owning a gun is uncivilized & brute, but we can look at that issue from a completely different perspective; maybe gun ownership actually made us more civilized, since guns act as equalizers.  All of a sudden a physically superior person cannot simply abuse a weaker one, since the gun will act as a deterrent.”  You can read more about Zoltan’s thoughts on gun rights here.

Of late, Zoltan has caught a bit of flack with the media for being one of the only major rock stars or celebrities to publicly endorse Donald Trump.  While I don’t exactly agree with that endorsement, I can’t help but admire a guy who has the guts to say whatever he really thinks even when he knows his opinion isn’t a popular one.

Regarding unpopular opinions, Zoltan has never shied away from defending the value of hard work.  As he has stated, “I became an American citizen.  I work my ass off.  I still work 12 hours a day.  Here, the possibilities are presented.  You can still get stuff done, but maybe you have to get off the couch.  Put down the pizza & beer.  But people don’t want to hear that.”

Zoltan has often spoken of how his work with martial arts has influenced his work ethic in regards to the band & life in general.  “And martial arts, which I started soon thereafter, has helped me with guitar, because in martial arts there is this saying, ‘Don’t accept the position.’  In other words, you fail when you accept a position that would be unfortunate for you.  That’s when you see things go sideways.  The music industry is an extremely difficult place.  It’s one in a million who makes it here.  Martial arts gave me the education of, ‘Don’t take a step back, keep going,’ which I applied to my music career.  I was 20 years old when I came to America with a guitar on my back & a bag of clothes, not yet able to speak English.  But I never gave up.”  (You can read more from that interview here.) 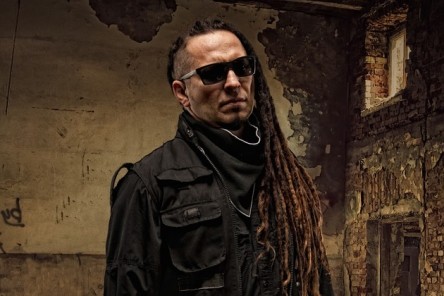 As I mentioned earlier, Zoltan’s first guitar was one he helped build himself.  “At age 13, I acquired a beat-up, secondhand guitar.  I removed the basically unplayable bolt-on neck & replaced it with one I made from a coffee table.  I painted it military green because we lived on an army base.  Eventually, I acquired a playable guitar, & once communism started collapsing I came to America.”  Regarding growing up in Communist Hungary, Zoltan has stated “When I lived in Hungary, I was always reminded that I could never become what I wanted to be.  Metal was, first of all, a sign of rebellion.  I remember I had to run from the police because I had long hair, so it was my way of showing society the middle finger.  It’s surreal because I’m doing now what they told me then that I couldn’t do.”  (Read more here.)  Furthermore he has said “I would say that since I was a tiny kid, I never had a doubt about what I wanted to do in my life.  I never had a doubt ever for a second that it was gonna happen.  The key to success really is you do have to have the unbending strength that you won’t accept defeat.  You just don’t accept no.  You don’t accept words like ‘impossible’ & you can’t connect to phrases like ‘can’t do.’  Failure is not acceptable.  Right?”  (Read more here.)

With a history of such hard work & determination from such a young age, one can’t help but feel his espousal of the power of a good work ethic carries considerable weight.  When asked what advice he would give to someone trying to start a metal band, Zoltan said “Don’t give up.  Never give up.  There is an old saying that I read in a boxing club.  It said, ‘You become a champion by fighting one more round,’ & it’s a wise saying.  If you want to succeed, you have to keep going.”  (Read more here.)  When speaking of the FFDP video for My Nemesis Zoltan stated “In life everyone has a nemesis… it can be anything… a self defeating thinking pattern, a bad habit, an addiction, an adversary… something or someone that puts you in an impossible scenario, where you are presented with a fork in the road.  Sometimes there is no other choice but making a hard choice.  You can give up & just suffer the situation, or you can use your pain to overcome it, as pain is truly the wind in the sails of change.  We wanted to present a story about moving on, a story that probes & questions compassion & loyalty.  Those are beautiful notions, but remember you have to be loyal & fair to yourself as well, so will you sacrifice yourself for another or will you live with the guilt that you didn’t.”  (Read more from that interview here.)

Zoltan as well as his bandmates have garnered quite a reputation for supporting the military.  As Zoltan has stated, “. . . it’s about the individual soldier , what it takes to do what they do.  When they are called upon, they can’t run away, their job is to go there & handle the situation.  It takes a lot of balls to do what these people do, so we always connected to them, the individuals.  For us it was never about the political agenda, we’ve never advocated war itself.”  (You can read more from that interview here.)  Not only has FFDP played countless shows for the military over the years, including in war zones like Iraq, but the band also employs many veterans as part of their security & crew.  Furthermore, they have participated in several campaigns to highlight the plight of veterans once they return from war or active duty.  Specifically the video for The Wrong Side of Heaven shines a light on the homelessness, mental illness, & high suicide rate that plague American veterans.  (You can read more about that here.)

In summary, Zoltan Bathory is an all around badass.  There’s just no better way to put it.  You might disagree with his political opinions or his views on guns, but I don’t see how anyone could not admire his insane work ethic & ability to overcome the odds.

If you’re not familiar with his band’s music check out some of my favorites: