It’s probably been close to three weeks since I’ve blogged anything, but I spent the last weekend of August in Boston visiting my college roommate (which was awesome, except for the part where I ended up in the ER at Mass General after passing out on the street), & then just a few days after that my grandfather was admitted to the hospital on comfort care & passed away a few days later.  So needless to say my life has been a bit of a whirlwind, both physically & emotionally, these past few weeks.

Ever since my grandfather died, I’ve been tossing around the idea of writing a blog post in honor of him & the things he taught me, but it’s taken some time for the pain of loss to ease enough for me to be able to write about this without dissolving into a mass of tears.  Just to be clear, the things I’m writing about today are not necessarily things PawPaw taught me in so many exact words but rather things I learned from him by watching the way he lived his own life . . . As has been said many times before by folks much wiser than I, actions truly do speak louder than words.

I’m not a big fan of country music anymore, although there are certainly exceptions to that rule (namely Eric Church, Kacey Musgraves, & Brandi Carlile), but there is a Montgomery Gentry song that came out when I was in high school that has never failed to make me think of PawPaw, especially these words right here:

And if all you ever really do is the best you can
Well, you did it man”

Here’s the video for the song if you want to check out the whole thing.

I never heard this story until PawPaw’s funeral, but it was so powerful that I feel compelled to share it.  One of my uncle’s friends who is now a pastor spent a lot of time at my grandparents’ house as a kid/teen.  This man’s own father was not very involved in his life, so he cherished the time he got to spend with my grandfather.  As it turned out when he went home to his own house & began talking about all the things his friend’s dad did with them, his own father eventually became inspired to take a more active role in his son’s life.  As I said earlier, actions really do speak louder than words & I’m so glad my grandfather lived a life in which his actions were proof of the love he had for his friends & family.

I’m going to close this post by sharing one of my favorite Black Stone Cherry songs, Things My Father Said.  The song is written from the perspective of a son whose father has died, but the emotions it portrays are relevant for anyone who’s lost someone they love & is trying to carry on the lessons that person taught them.

Below are the lyrics:

“The things my father said would make me a better man
Hard work and the love of friends, a woman that understands

Sometimes I remember, when you taught me to tie my shoes
One thing I will never forget, is the day that I lost you

And if you have a dream you better hang on for dear life
And when that cold wind blows, just let it pass you by

The things my father said

If I have any regular followers on here, I apologize for my sudden absence.  I realize it’s been over two weeks since I’ve posted anything; indeed I had to actually pull up my own blog to even remember what my last post was about.  My life has just been a whirlwind these past few weeks between general insanity at work (including doing some overtime) & my grandfather being sick. 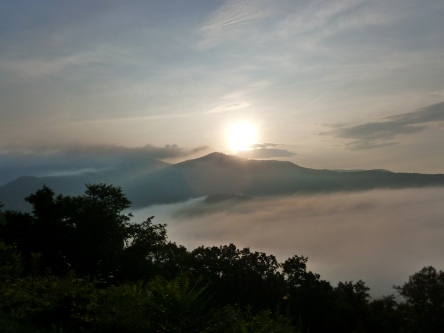 I’m including some pictures from our recent vacation to Asheville so that this post won’t feel overly pessimistic.

To elaborate on the last point, I rarely post such personal things on here, but my grandfather had a bad fall about a month ago & spent several weeks recovering in UVA hospital.  He was finally released to rehab only to now end up back in another hospital with aspiration pneumonia.  Over the past few years I’ve noticed that his memory has been slowly worsening, but ever since the fall in addition to his injuries & subsequent surgeries, he’s had a lot of confusion & restlessness.  As a nurse, of course I know this isn’t uncommon in someone his age who’s been hospitalized, especially after such a traumatic fall.  But nonetheless I can’t shake this horrible feeling that he’s never going to recover to his baseline.  Statistically speaking, the odds really are against him, as I well know from the many similar patients I’ve cared for over the past few years.

Wildflowers at Mt. Mitchell, highest point in NC & on all of the East Coast

This is one blog post I kind of hope my family doesn’t see because I don’t want them to be disheartened.  I really don’t want them to know how negative I feel about this whole situation.  But at the same time I feel like I really need to express the sadness I’m experiencing right now.  I know it doesn’t make any sense, but I am terrible at expressing emotions around my family, at least so-called “negative” emotions, that is.  For example, it’s very rare that I cry in front of anyone other than my husband.  I just hate for even my own family to see me being “weak.”  I know that’s ridiculous & totally unhealthy, but it’s just the way things have always been for me.  At times like these, I realize how much harder that makes things because in the end I’m just bottling things up which is never, ever a good idea.  So that’s why I’m writing all of this, in an attempt to be more honest about how I feel & not just try to put on a brave face for everyone.  In the end I don’t think putting on a brave face helps anyone.  It’s better to just be honest & say how we really feel.

I guess since my grandparents on my mom’s side are so much younger than my dad’s parents were I’ve always taken it for granted that I’d have them around for a really long time.  I never really doubted that they’d be around to see me graduate from college, get married, & have kids someday.  As it turns out they’ve seen the first two of those things & for that I’m eternally grateful.  But I just keep having this horrible thought that even I if I got pregnant tomorrow (which is not going to happen, just to be clear) my grandfather might not live to see that child.  Or even if he does he might not have the mental capacity to really understand & appreciate the experience.  And my future children might not have the blessing of getting to really know him as the man he really is.  And that breaks my heart.

Most recent good picture I have with my grandparents is from our wedding 4 years ago. Photo credit to Triskay Photography.

Of course it’s possible that I’m being fatalistic & overly negative here.  But the fact of the matter is that as a nurse I see a lot of similar cases & I can’t deny that the endings often aren’t pretty.  One of the first things I learned as a nurse is that merely surviving isn’t enough.  Quality of life is everything.  I know my grandfather would never want to live the rest of his life in a nursing home, so even though he’s made a lot of progress, for which I am very grateful, I still fear that he’ll never make it back to his baseline & thus his quality of life will suffer greatly.  I really do hate to sound negative, but I’m speaking from experience here . . .

The truth is I’ve never seen the point in being overly positive or overly negative in life; I just strive to be realistic.  I learned a long time ago that sometimes it’s best to have low expectations for the things in life which you can’t control . . . I find this prevents a lot of disappointment & quite often leads to unexpected happy surprises.  Maybe some people would say that’s a negative way to live, but it works for me.

As I finish this the same way I started it, with tears in my eyes, I guess the best I can do is prepare for the worst & hope for the best . . .

PawPaw, I love you so much.  Every time you hug me I can see in your eyes how much you love me & how proud you are of me.  I’ll never be able to say how much that means to me.  I want you to recover & get back home to the life you knew before all of this.  But if that isn’t possible & your quality of life is such that you don’t feel you can take it anymore, I want you to know that we love you enough to let you go.  Please don’t hang around being miserable just for us.  More than anything I don’t want you to suffer.  I love you.

In conclusion (for real this time), I’ll end with a few Pema Chodron quotes because her words always bring me a sense of peace & calming, no matter the situation at hand.

“Rather than letting our negativity get the better of us, we could acknowledge that right now we feel like a piece of shit & not be squeamish about taking a good look.”

“We think that the point is to pass the test or overcome the problem, but the truth is that things don’t really get solved. They come together & they fall apart. Then they come together again & fall apart again. It’s just like that. The healing comes from letting there be room for all of this to happen: room for grief, for relief, for misery, for joy.”