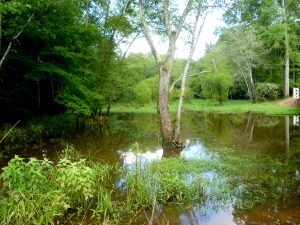 Because all blogs posts are better with pictures, I’ve included this photo taken on the Neuse River Trail in Raleigh on July 4th this year.

For as long as I can remember I have always been “Miss Responsible.”  I have always been the girl who did her homework early, finished her papers well before the deadline, created study guides for tests & shared them with classmates, & packed too much for every out-of-town trip because I always imagine everything I could possibly need.  As a nurse I always have my patients’ lab values & test results written down at the beginning of every shift & I always make sure to update my data & give the latest lab results in report to the next nurse.  I obsess over I&O’s so much that I often have to remind myself that I’m not a patient so I don’t need to measure my own I&O (yes, you can laugh WITH me for that).  I like to think that this makes me detail-oriented but also capable of seeing “the big picture.”  Unfortunately underneath all of this responsible behavior lies a great deal of anxiety.

The first time I saw a psychologist was about a year and a half ago when we were still living in SW Virginia.  I was concerned that I might be OCD because of how detail-oriented I am & the anxiety that this sometimes causes me.  The psychologist quickly assured me that my life is far too organized & controlled for me to actually have OCD (anyone else think that’s an ironic truth?), but that I do have “OCD personality characteristics” which he insisted actually make me a great nurse (I’d like to believe that!).  I continued seeing him maybe once a month until we moved to NC just so I could have a place to vent to someone who wouldn’t go home & worry about me or be offended by anything I said since he had no emotional connection to me.

The first few months in the Raleigh-Durham area were difficult.  Growing up in a place that had four stop-lights in the whole COUNTY makes moving to an urban environment like this an exciting but sometimes daunting challenge.  I hoped it would be easy to meet people & make new friends, but it was nothing like college where I could just walk down the hall or go to class & meet all kinds of interesting people.  (My first year out of college I still had friends in the area who were either still in college or who had graduated but, like me, still lived in the area.)  Sometime around my birthday last year I was feeling quite depressed & lonely especially as the holidays approached & I knew that, being a nurse, I would not get to spend much time with my family due to work obligations.  I decided to once again try a psychologist who turned out to be a very nice older man.  I told him how much I love music & missed playing my flute with a group, so he, a musician himself, told me about a music store downtown where he was certain I could get information about a local flute group.  I took his advice, got lost in downtown trying to find the store, eventually found it, got the information about the flute ensemble, & joined the group in January when their new “semester” began.  I didn’t end up making any great friends in the group but just the experience of making music in a group again brought me great joy.

By the time January-February came around I had started making more friends at work & generally feeling a lot happier with life, so I never went back to see that psychologist until one fateful day this summer when I was talking to one of my best friends online.  She was telling me about her struggles with bipolar disorder & I suddenly realized that my own struggles with anxiety were far from controlled, especially in light of the fact that I have started thinking a lot more about having children someday.  I felt such a relief in knowing that I wasn’t the only “crazy” one out there & also in knowing that if she had the strength to seek treatment I could too.  With her encouragement, I immediately called the psychologist I had seen in December & booked an appointment for that very day.  As it turned out, the psychologist told me I should see a psychiatrist in case I needed actual medical treatment for a possible anxiety disorder.  I was both devastated & relieved.  It took quite a few phone calls to find a psychiatrist who would accept my insurance & once I found one I had to schedule my appointment for a month in the future.  In the ensuing month I considered canceling the appointment so many times.  On good days I would tell myself, as I have so many times in my life, “I’m fine.  I’ve got this.  My life is so ‘perfect’ in so many ways.  I’m 24 years old, married to a wonderful man with whom I own a beautiful house in a gorgeous neighborhood, I have great health, & I’m about to train for charge nurse at my job.  How could I possibly need to see a psychiatrist?”  But on bad days, I couldn’t wait for the appointment just so I could hear what the psychiatrist had to say.

Well, finally the day of the dreaded/highly anticipated appointment arrived & much to my relief the psychiatrist was extremely friendly & put me immediately at ease.  She assured me that I do not have any true mental illness & definitely do not need any medication.  However, she suggested I start seeing one of the counselors in her office to work on some of my anxiety & self-esteem issues which, though they may not be “significant” enough to warrant the title of a true disorder, are still serious enough to bother me.  She applauded me for being so self-aware & for caring so much about my future children that I want to be the best, most stable version of myself before I seriously consider becoming a parent in the next couple of years.

As it turned out one of the counselors had had a last-minute cancellation right at the time my visit with the psychiatrist ended so I was able to start with a counselor that very day.  The counselor was very gentle, caring, & quickly made me feel comfortable in her beautifully decorated office.  I left the office that day feeling “lighter” than I had felt in God knows how long.  I had my second appointment with her last week & I already can’t wait to go back.  I honestly think everyone can benefit from counseling with a good therapist at least a few times a year.  As a friend of mine used to say, we ALL have issues from our childhood, our families, our friends, & just LIFE in general & we all can all benefit from having a caring but objective person to vent to who, as I mentioned before, isn’t going to go home & worry about you or be offended by anything you say (because they have probably heard MUCH worse) & doesn’t have any real emotional connection to you anyway.

It may sound strange to say I am excited about being in counseling, but I really am.  I’ve known for most of my life, even as a kid, that I am a very sensitive, perceptive person.  As my middle school English teacher, wise woman that she is, told me, I am both highly intelligent & highly sensitive which makes me feel things, both good & bad, more strongly than perhaps the average person does.  I hope that doesn’t sound arrogant but I don’t know how else to put it.

As much as I would sometimes like to trade in my brain for one that just doesn’t THINK so darn much about EVERYTHING, I know at the end of the day this brain is what makes me who I am.  I do think it makes me a good nurse; as I have told both psychologists, the psychiatrist, & my current counselor, I often think I am my best self at work because I have something important & meaningful on which to focus all my nervous energy & obsessive tendencies.  And I’d also like to think this brain makes me an empathetic human being who makes a consistent effort to recycle everything possible, donate to charities, & buy water bottles for homeless people who are stuck outside in the heat.

In the near future I hope to post more about my struggles with what one might call “sub-clinical anxiety.”  This isn’t a comfortable topic to discuss & I’ll admit that I feel like I have taken the easy way out by writing about this as a blog post instead of just telling my family, friends, & coworkers in person about my issues.  But as my counselor told me this past week, we all have to start somewhere.  In the meantime, I hope this post will encourage even one person to seek counseling or treatment for their own issues with anxiety or depression.  And for those of you who are lucky enough not to struggle with such issues (though I daresay we all will at some point in our lives), I hope this post will encourage you to be more considerate & compassionate of those who do.

Also, please check out my friend’s brilliant blog (who inspired my own) at http://doesthatmakemecrazyblog.com/