There was a shooting in my hometown today (about three hours away from where I now live).  Being a very small town in a very rural area, this isn’t exactly something you expect to read about when scrolling through your Facebook newsfeed.  But sadly this isn’t the first time there’s been a shooting in this supposedly peaceful place.  It’s the second hometown shooting I’ve found out about via Facebook just in the past four or five years.  In any case it goes without saying that this is a horrific tragedy that has no doubt affected countless individuals.  It’s ironic to me how so many people have this idea that small towns are inherently safer, more peaceful, and generally more moral than the rest of the world.  I can tell you from personal experience that they are not & that small towns are exactly how Agatha Christie used to describe them in her books: they are a microcosm for the larger world.  All the evil that exists in the world as a whole exists just as strongly in a small town.  It just might not seem quite as apparent if given only a cursory glance.  This isn’t a rant against small towns (even though I’ve long since realized that small town life just isn’t right for me anymore, at least at this stage of my life).  I’m just trying to say that evil is everywhere.  There’s no running from it.  No hiding from it.  However, despite what I often hear, especially at times like this, I don’t believe the world is getting any more evil than it’s ever been.  First of all there is absolutely no scientific way to measure that.  And second of all, I truly believe it’s only due to technology such as TV & the internet that we are more aware of so much of the evil in the world, which of course makes is seem like the world is getting worse & worse.  Perhaps if good news received even half the attention that bad news receives, we wouldn’t be so convinced that the world is “going to hell in a handbasket,” as it were.  But sensationalism sells . . . 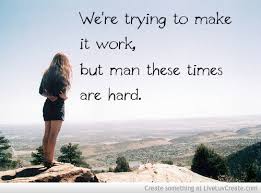 Anyway, at times like these, I find myself slipping into the cynicism that inevitably rears its ugly head whenever such senseless tragedies occur.  I did not personally know the victim but I interacted with her a handful of times growing up, as she worked in the local school system, & her son was involved in a teen group at my church when we were growing up but I haven’t seen or heard from him in many years.  The alleged perpetrator as I understand it, who at this writing is still at large, was a barber in town for many years & as such was well known in the community (somebody correct me if I’m wrong here).  I believe my dad used to go to his barber shop.    Point being, I don’t have a strong personal connection to this tragedy, but even so it is a shocking event that sends the mind reeling with questions about the uncertainty & unfairness of life.  I like to think of myself as mostly a positive person but I think at heart I am actually a realist.  I cannot help but see reality for exactly what it is most of the time.  For example as a nurse, I cannot help but realize how completely futile the care I provide is at times.  Or when I think about becoming a mom, I cannot help but realize how difficult & tiring of an undertaking that will be.  I often hear women say “Babies are cute but I just had no idea how much work this would be.”  When I hear such things, part of me wants to slap them in the face.  How could you NOT realize how much work a baby will be?  To me it’s just so obvious.  Just as it’s obvious to me that a 90 year old who cannot speak, eat, or care for herself in any way & generally has no quality of life should be a DNR and should not receive a feeding tube to prolong her misery.  But I’ve strayed from the point . . .

What I’m saying is I’m struggling right now to fight my way out of the darkness.  I know there are plenty of wonderful people in the world & I truly believe that good is stronger than evil.  If I didn’t, I don’t think I could keep going.  But when you’re presented with tragedies like this that quite literally hit close to home (the shooting occurred maybe two miles from my parents’ house), it’s easy to lose sight of that.  Having no strong personal connection to this horrifying event, I feel actually quite selfish being so upset by it.  I know the victim’s family & friends are suffering so much right now.  Yet I also know there are others like me who have no real connection to this story & yet are horrified just the same.

Certainly this is a time of grieving for my hometown & there is absolutely nothing wrong with taking our time to grieve & process such a horrific event.  As I wrote around Christmas, grief is a ghost that will haunt us forever until we learn to work through it (https://athicketofmusingsblog.com/2013/12/18/processing-grief-during-the-most-wonderful-time-of-the-year/).  We each must identify the coping mechanisms that help us to work through our grief and the cynicism that can naturally follow such a tragedy.  For me music is quite often the best healer.   Music along with writing is what helps me make sense of a senseless world.  Or perhaps I should say to come to terms with a senseless world.

As it turns out, earlier this week I was fooling around on YouTube, as I often do, & came across a new song by a band I discovered at Uproar Festival in Raleigh in September of 2012, shortly after we moved down here.  The song is called Times are Hard by Redlight King.  I have been listening to it almost non-stop for the past few days & I cannot help but feel like the timing of discovering this song was quite providential for lack of a better word.  The song talks about how when life is hard, when tragedies take us by surprise & there seems to be no balm for our wounds, we need to find someone to hold onto to keep us strong.  How appropriate at a time like this.  To me it’s an empowering song, yet it doesn’t gloss over how difficult life can be at times.  I don’t know if the song was necessarily written about this kind of horrific tragedy, but that’s the beauty of music: it can mean whatever you want it to mean.  It can speak to you wherever you are at this point in time.

I’ll leave you with the lyrics & a link to the song on YouTube.  Check it out.  It’s powerful stuff.

Sooner or later life will pull you in

Make you choose to either sink or swim

Somewhere down the line it’s gonna break your heart

Put you out & make you wear the scars

All these dreams, they come with all this doubt

Learn to fight so they don’t seal our fate

We build those bridges & we watch them burn

So quick to pull the trigger, so slow to take our turn

Some of us hit the dirt, some of us still come back for more

When the thirst gets so bad, you’re just dying to get a taste

Life isn’t perfect, so it’s just what you make it

And that’s what they tell you

But it’s hard when they’re holding you down

Somebody out there for you

They’re praying it all gets easy

Someone you hold onto