A few weeks ago I wrote a post about things I’ve learned from country music & stated that I would be writing a similar post for each major genre of music.  Naturally my next post for this theme is about rock & roll since that is my favorite type of music.  I tried very hard to narrow this list down to five songs like I did for the last post but I just couldn’t do it, so I decided that since rock is my favorite genre it wouldn’t be too superfluous to choose a few more songs.  Besides unlike writing for school assignments, this is my blog so I can make the rules.  Ha!  😉 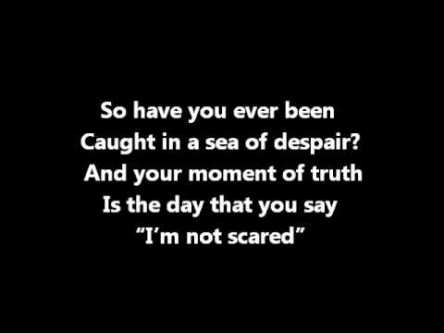 Please do be advised that some of these songs are not totally G-rated as far as some of the words are concerned (but, hey, that’s rock & roll, right?).

These are in no particular order.

1. Unity by Shinedown: To anyone who thinks that rock & roll is all about drugs & “darkness,” please listen to this song.  In my opinion this is one of the most inspiring, hopeful songs I’ve ever heard.  I’ve seen Shinedown in concert twice & both times their live performance of this song has been incredibly powerful.  The message of this song to me is that no matter how scared or lonely you feel, you’re never alone & there is always hope.  And “your moment of truth is the day that you say ‘I’m not scared,'” which to me means not so much that you’re no longer afraid of the darkness but that you’re facing it anyway.  After all true courage is not the absence of fear but rather the willingness to proceed despite fear.  Perhaps the best way to sum up this song are the lines Brent Smith, the lead singer, says at the beginning of the music video: “We will not fall because we have each other.  We will not fall because we are brothers.  We will not fall because we have love.  We will not fall because we will rise above.”  http://www.youtube.com/watch?v=_gVdi6sizeY

2.  Here’s To Us by Halestorm: If you aren’t familiar with the female-fronted rock band Halestorm please do yourself a favor & head to Youtube right this minute to check out their fantastic music.  This song is a great place to start, though it’s a bit softer than their average piece.  This is a song that celebrates the transience of life & the fact that mistakes don’t have to be our downfall.  Despite being somewhat softer in style, to me this song is the ultimate “I can do this” song.  It’s what I listen to when I feel like I’m just barely getting by in life, when I need a pick-me-up & a reminder that no matter what life throws my way I’m capable of not just surviving but thriving regardless of the situation.  The music video is also an awesome tribute to the past couple of decades of rock music (note the changes in clothes, makeup, & stage performance throughout the video).  http://www.youtube.com/watch?v=KC0DNLDXJW8

3.  Justice  by Rev Theory: I still remember the first time I heard this song; I was driving to Blacksburg to visit Jared.  As soon as I got to Jared’s apt I pulled out my laptop to Google the song & figure out who sang it.  This song was one of those “love at first listen” songs for me.  To me this song is just pure adrenaline & righteous anger.  It’s the perfect song to listen to when you feel you’ve been wronged by someone or when life just feels unfair, which is of course inevitable from time to time.  However, if you watch the video you get the feeling that this song was written about more than just the every-day injustices of life & more about the war crimes & crimes against humanity that occur throughout the world.  In any case, it’s a fabulous piece of rock & roll that you should seriously check out.  http://www.youtube.com/watch?v=q5N80tNDCGg

4. Weathered by Creed: This is one of those songs that speaks to the difficulties & sorrows of life & how sometimes we just feel like we’re barely holding together, barely making it from day to day.  We’ve all had times in life when we feel like that for whatever reason.  What makes this song so special to me is that it addresses those feelings without holding back, without trying to conceal how ugly & despairing we can feel at times, while also giving hope that there is more to life than this darkness.  My favorite lines are these:

“Take all this pride/And leave it behind/Because one day it ends/One day we die/Believe what you will/That is your right/But I choose to win/So I choose to fight.”  These lines remind us that life is too short to stay miserable forever & that in order to succeed in life we must never give up the fight.   Sometimes that means laying down our pride, asking for forgiveness (from ourselves as well as from others), & pushing onward. http://www.youtube.com/watch?v=wu0VRsVCQ48

5. Wrong Side of Heaven by Five Finger Death Punch: If you’re not familiar with Five Finger Death Punch (FFDP) please do yourself yet another favor & look them up on Youtube immediately.  Ivan Moody’s brooding voice combined with the fantastic musicianship of the other band members makes for some seriously epic music.  I don’t think they’ve ever made a song that I didn’t like.  Though it’s difficult to choose, Wrong Side of Heaven is certainly one of their best pieces.  This song describes the eternal battle between good & evil that exists inside all of us.  The lyrics refer to God as a “she” so if that offends you, I’m sorry that you will miss out on such an amazing song.  Wrong Side of Heaven describes how as adults we are faced with the startling realization that right & wrong are often not as easily recognized as we would like them to be & that at some points in life we are all going to be disappointed with the choices we make (“What have I done, who have I become?”).  In spite of this though we cannot take the easy way out & blame the devil or anyone else for our bad choices (“I spoke to the devil today, and he swears he’s not to blame/And I understood, ’cause I feel the same”).  This song resonates so much with me because I feel like the battle between right & wrong is something each of us faces every single day & we are all at times “on the wrong side of heaven & the righteous side of hell.”  Perhaps another reason this song speaks to me so much is that I often feel like I am caught in the middle with my friends because I am more conservative than my liberal friends & more liberal than my conservative friends. http://www.youtube.com/watch?v=RsCp3l815G8

6. All I’m Dreaming Of by Black Stone Cherry: Black Stone Cherry is an awesome rock band with a lot of Southern rock influences that are sadly not as well known as they should be.  Their entire album from which this song comes is fabulous.  All I’m Dreaming Of is a gorgeous song that speaks to the need for more love in the world.  I think the best way to show the power of this song is simply to share some of the lyrics, so here are some of my favorite lines from the piece: http://www.youtube.com/watch?v=I60g8Vfr0xs

Something about our world today
That makes me wanna cry
There’s too much anger and too much pain
Too much money and too many lies
If I could have one wish tonight
I would beg of us to forget our pride
If we could do just one thing right,
We could help each other to love our lives

7. It’s My Life by Bon Jovi: To me this song encapsulates so much of the traditional spirit of rock & roll.  This song celebrates the idea that life is short so we better make the most of it while we can.  Sometimes that means doing things our way & disregarding the opinions of others, even those who mean well but don’t agree with us for whatever reason.  I certainly don’t think that we should seek to have fun at the expense of others or disregard our work/school/family obligations in search of fun, but I do think we should seek to enjoy our lives as much as possible.  For after all if we don’t enjoy life, why are we here?  To me this song embodies the idea that instead of asking why we should do something we ought to be asking “why not?” http://www.youtube.com/watch?v=9SKFwtgUJHs

I could write about so many more songs but then this post would be long & probably boring.  To me rock & roll encompasses the whole spectrum of human emotion & that’s what makes it so powerful.  Please check out some of these pieces if you’re not familiar with them; I promise they won’t disappoint.  As someone who once thought rock & roll was of the devil & generally grating to the ears, I can now say I’ve learned there is so much more to it than initially meets the eye (or should I say the ear?) & it’s well-worth your time to invest in some good rock music.  You never know, it might even become your new favorite genre, as it has for me!