Does anyone else find themselves saying this a lot?  I sure do.  If there’s anything I love about myself it’s the fact that I’m very introspective & analytical.  I can never stop thinking, thinking, thinking all the time.  This is either a sign of intelligence or insanity or perhaps both; I’ve never been quite sure.  In any case, this aspect of me is both my most loved & most hated attribute.  I love being introspective & analytical because it makes me a good writer (how else do I makes sense of all the ideas dancing around non-stop in my brain?) & a good nurse (or at least I like to think so).  It also makes me a good friend, a good wife, a good person. 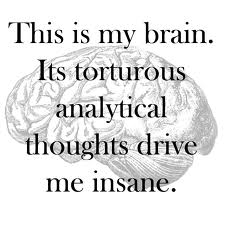 On the other hand I hate it because it makes me anxious, prematurely “old,” & generally odd.  It makes me the kind of person who doesn’t get invited to a lot of parties or bars.  It makes me that weirdo who actually STRUGGLES with relaxing.  Yes, I know, ridiculous, right?  You know how many times in my life people have casually told me “Drink some wine.  Have a beer.  Just relax”?  If I had a dollar for each of these occurrences, I’d be quite wealthy by now.  But I don’t.  If only these people understood what it was like to have that voice in your head that never shuts up, that even alcohol isn’t capable of silencing.  That unrelenting thirst for knowledge, emotional depth, & intimacy & the never-ending curiosity that sends the mind reeling with endless questions, many of which will never have solid answers, at all hours of day & night.  On rare occasions a glass of wine really is relaxing for me.  But most of the time it just makes me pee a lot.  Tonight is the latter unfortunately.

I’ve often said if I could change anything about myself, I would change the fact that I am such a “serious” person who truly does struggle with the ability to relax.  I don’t even know how to really describe this phenomenon because it’s not that I don’t have fun or enjoy life.  I certainly do.  It’s just that there’s always that voice in my head that never STOPS.  I’m not talking about hallucinations here.  I’m just saying that I can never stop THINKING, THINKING, THINKING all the damn time about EVERYTHING.  It’s really quite exhausting.  There are times in my life like tonight where I think I’d trade everything I have to know what it’s like to just say “I’m not going to think about such & such right now” & actually do it.  To look at a situation & not probe so far beneath the surface.  To look at a baby & see only the wonderful side of motherhood instead of thinking too about all of the work it involves & how I’ll never be up to the task.  Arghh.

In the end though it’s this analytical introspectiveness that defines me more than anything else.  For better or worse, it’s what makes me who I am.  And I know there is a place in the world for people like me.  We’re needed just as much as anyone else, even if we’re never going to be the “life of the party” so to speak.  I like to think it’s this highly analytical thinking that makes me appreciate the simple things in life so much: the beauty of a sunset, the sound of the breeze rustling through the trees, the way the frost makes everything look so magical in the mornings, the intensity of emotions that music (even, or perhaps especially, music without words) can incite.  In any case, this is the hand I’ve been dealt & I’m going to play it the best I can.

So, brain, carry on; do what you do best: THINK about everything all the time.  But just leave me with enough sanity to remember that I’m not alone & that life really is amazing.  Thanks.