I usually try to be pretty positive on this blog because I think there’s enough negativity in the world . . . But I have to admit that today’s post is probably going to be a little cynical because frankly that’s how I’m feeling right now.  What with some challenging, exhausting events at work this week plus the frustration of watching some of my own friends & family support this Confederate flag nonsense & subsequently freak out over the Supreme Court ruling on gay marriage today, it’s all made me want to pull my own hair out.  I just want to scream “Have some empathy for two seconds, people!”

I haven’t had enough sleep in the past 72 hours to formulate well articulated arguments, but I am so full of anger & frustration right now that I know I need to write something, for my own sanity if nothing else.  So here goes.

If you support the Confederate flag, please stop for a minute & ask yourself this: if you were black or part black or perhaps married to someone who is black, how would this flag make you feel?  As one of my friends so eloquently pointed out to me today, the Confederate flag was not even popular immediately after the Civil War.  It wasn’t until decades later that certain segments of the (mostly) Southern population took up the flag as a symbol, largely as a sign of their hatred of blacks.  Hmmm.  Now trying to say the flag doesn’t support racism sounds even harder to believe . . .

Yes, I am smart enough to understand that the FLAG isn’t what makes people racist . . . That’s obviously a behavior/mentality that develops over time.  As some have astutely observed, Ferguson, MO & Baltimore had “race riots” & those states do NOT fly the Confederate flag over their state buildings while South Carolina, who does, has NOT had riots, despite the recent racially motivated mass murder.  So, no, the FLAG isn’t what makes people racist or do hateful things.  But it is still a SYMBOL that represents a less than stellar history in the treatment of black people in this country, & as such it has no place in our culture.  If you were Jewish, would you want to see Swastikas flying around on government buildings?  Didn’t think so.

As a Libertarian, I obviously value freedom & I don’t think that PRIVATE institutions should be banned from using the symbol if they desire to do so.  I still think it’s a stupid thing to do, but, hey, this is America; you have the right to be ignorant if you want to be.  But there is no place in any official government position for the Confederate flag because of its history & the not so subtle “you’re not welcome here” message it sends to our African American citizens.  Furthermore, as another wise friend of mine pointed out, being proud of being Southern does NOT mean you have to embrace the Confederate flag.  There are plenty of other things about Southern culture to embrace to show your cultural pride if you feel so inclined.  (I have very mixed feelings about the South myself, but that’s another post for another day.)

As a Libertarian, I don’t believe private organizations like churches should be forced to marry anyone they don’t want to marry.  That’s fine.  I respect that even if I completely disagree with their reasoning.  Hell, there are churches that would have refused to marry me & my husband because we lived together before we were married.  As crazy as I think that is, I still support their right to do so as a PRIVATE organization.  But I see no good argument whatsoever for why gay marriage should actually be ILLEGAL in this (or any other) country.  When I see pictures of my gay/lesbian friends on Facebook with their lovers/husbands/wives, I feel nothing but happiness for them, today especially.  End of story. 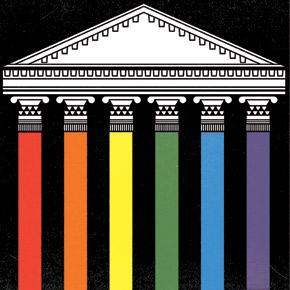 There really isn’t a focused point to this post.  The last thing I want to do is stir up arguments & debates.  I don’t have the energy for that right now, mentally, physically, or emotionally.  But for my own sanity, I just needed to write to clear my brain a bit because I’m so frustrated & angry at the lack of empathy I see around me right now.  We can be better than this, people.  We really can.

I’m out of even half way eloquent words right now, so I’ll end this post with a link to the video for a song I discovered this week that could not possibly be more relevant right now.  The lyrics are in the video, but you can also read them below the link: Christ Copyright by Nothing More

Nothing More, an awesome rock band out of TX whose music I was lucky enough to discover this week