Alright, y’all, today I thought I’d post something light-hearted & fun: a recipe!  For those of you who know me in real life, you know that I am not the biggest fan of cooking, but I like to think that what I do make is usually pretty good.  Last week a coworker of mine told me about an easy dish that she likes to make: coconut milk & curry chicken.  In the past couple of years I’ve developed a love for curry (the yellow kind) so I was immediately interested.  My coworker gave me a basic rundown of how she makes it, & this past weekend I gave it a try.  It was delicious, super easy, & fast, basically the three things I require of any recipe I want to use on a regular basis.  Today I decided to experiment a little further with the recipe by adding potatoes, & let me tell you, it was absolutely divine.  I was standing in the kitchen trying not to lick the bowl because it was soooo good.  So I thought, let’s do something different & post a recipe today because I’m sure there are others out there who like me are always on the look-out for a new easy recipe.

I wish I’d thought of this idea as I was cooking so I could have taken pictures as I went but we’ll have to make do with the ones I took afterward.

1. Put your skillet on the stove & turn the burner on to about level 3-4.  I always use cast-iron skillets because I believe they make food taste the best.

2. Use a spoonful or two of coconut oil (or your preferred cooking oil; coconut is my favorite because it doesn’t splatter like olive oil does).  This is the coconut oil I currently use:

3. Once the oil is hot, sprinkle some curry into it & let it simmer for a minute or two before adding the chicken.  I never measure much of anything when I cook, so I don’t know exactly how much curry I used.  I would just recommend starting with a little (at least 1 TBS) & adding a little more as the dish is cooking & tasting to see how much you like.  This is the curry I use which I got at Sam’s Club but most grocery stores have it, just in smaller bottles or perhaps a different brand.

4. Add in your chicken.  I used pre-cooked chicken that I got at Sam’s Club because frankly I am lazy & this is so much easier.  For the more ambitious cooks out there, you can use any type of chicken you have around, but I would recommend cutting it into small pieces so that it cooks faster. 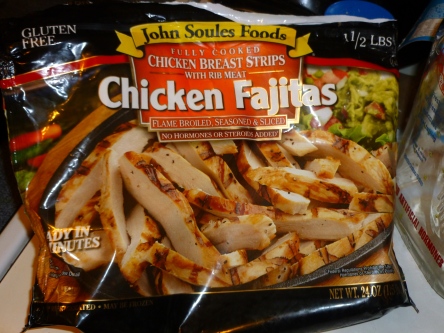 5. Allow the chicken to simmer with the curry for a few minutes.  If you’re using raw chicken, obviously this will take a little longer & you’ll have to use your own judgment about when to add in the coconut milk.  With the pre-cooked chicken, I added the coconut milk after about 3 minutes.  The can of coconut milk I used actually had a very similar recipe on it & it suggested using the whole can.  When I made this over the weekend I only made enough for 2 servings & I used maybe 1/3 of the can.  (For reference, the can was about the size of a regular can of Campbell’s soup.)  Today I made enough to hopefully last 3-4 servings so I used the remainder of the can.  I already threw away the can so I don’t remember what brand it was but any kind of basic coconut milk should suffice.

If you want to use the potatoes, I would recommend starting them first so they are already boiling before you start everything else.  I think this recipe would also go very well with rice, though I haven’t tried that yet.  I apologize that these directions aren’t super specific as far as measurements go, but that’s just the way I cook.  I think it’s more fun that way.

Word of warning: If you’ve never cooked with yellow curry before, just know that it does have a tendency to stain everything it touches a nice bright yellow color.  So wash your cooking utensils quickly so the stain comes off easily.

Additionally, this recipe reheats very well which is always a huge selling point for me because I love good left-overs; they mean less cooking for me!

Please let me know if you try this recipe, & if so, how it turns out.  Happy cooking!